cancel confirm NSFW Votes: (0 votes)
Are you the publisher? Claim or contact us about this channel.
0
Showing article 6 of 16 in channel 58017354
Channel Details:
People Here Also Viewed:
Loading ....
Viewing all articles
Browse latest Browse all 16
0
0 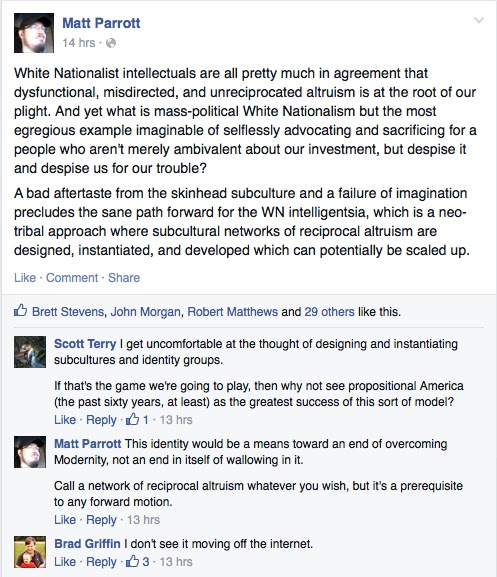 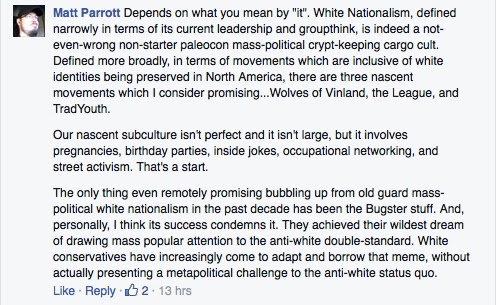 "Defined more broadly, in terms of movements which are inclusive of white identities being preserved in North America, there are three nascent movements which I consider promising... Wolves of Vinland, the League, and TradYouth."

"The bulk of WN (White Nationalism) is an online thing. There are only a handful of exceptions. I used to live in VA and saw first hand what the Wolves are building. They are sort of an outlier though."

"It might be the leading example of a real world WN (White Nationalist) community in the North American continent."

We need to thank both Matt and Brad, because we weren't sure how to classify this group. Thanks to them, we now know that the Wolves of Vinland are part of the whole White Nationalist movement. Going forward, we will refer to them as such as we trust Matt and Brad's judgement, given their combined years of experience with White Nationalism. Thanks guys!

Mini Chenille Candy Cane Ornaments for your Feather or Wooly Tree, set of 12...

ANNOUNCING SWATCH OF THE MONTH 2022

Who was Victor Wayne Harris on 'Seinfeld' ? #whispers #harris #worker...

No scan issues, but warning message

Man stabbed in the torso in Saffron Lane, Leicester

Re: If a three digit number xyz has 2 factors, how many factors does the

Child Kidnapping: Amy McNeil was kidnapped on her way to school by 5 adults;...

Does Brandi Schulz from storage wars have breast implants ? #storagewars...

Places in Town Board Game

Under Armour® is Hot for the Holidays

Back Into The Closet: From why we have Clueless to thank to the costume Drew Barrymore absolutely hated, all the wardrobe secrets from Santa Clarita Diet

'It doesn't matter how tall of a wall you put up': Trump's border-wall plan is still full of holes

Mini Chenille Candy Cane Ornaments for your Feather or Wooly Tree, set of 12...

ANNOUNCING SWATCH OF THE MONTH 2022